In the first "green claims" adjudication since the Advertising Standards Authority published its recent guidance on green claims (covered here), hot on the heels of Competition & Markets Authority's publication of its Green Claims Code on 20th September 2021 (covered here), the ASA has condemned a generalised green claim which also failed to consider the full life cycle of the product.

The advertiser in the dock is Alpro, a leading manufacturer of oat, soy and almond plant-based substitutes for milk and yoghurt. We all know that dairy milk from cows is a major contributor to climate change because of the methane they produce, as well as their need for extensive grazing, which is why we are being encouraged to migrate to a more plant-based diet by consuming less meat and dairy. However, this has led to an ongoing struggle between dairy farmers and brands like Alpro, with legal challenges to their right to describe their products as 'milk' and challenges to their advertising. In this case, the ASA do not name the single complainant, who they have therefore treated as a consumer, but we suspect it was a Mr Edward Grundy of Ambridge, in the county of Borsetshire. Or someone similar.

The Alpro ad was a bus-side poster which included the claims "Your recipe to a healthier planet", "Good for the planet" and "Good for you". The artwork comprised 3 pack shots of a "milk" cartoon, with text stating “Almond” and “all plant, seriously nutty”; a second "milk" cartoon with text stating “Oat”, “No Sugars” and “all plant, totally unsweetened”, and yoghurt pot labelled “Plain”. In addition, there was a leaf shape with the words “Deliciously Plant-Based”.

The anonymous farmer - sorry, complainant - believed commercial almond farming is also bad for the environment, and said that one specific claim in the ad, “Good For The Planet” was misleading and challenged whether it could be substantiated.

In their defence, Alpro said that consumers understand that plant-based products have a lower environmental impact than alternative dairy-based products. They also said that it is widely recognised that moving a plant-based diet is a way to reduce the carbon footprint of food sector. To be specific, plant-based alternatives to dairy milk require less water, less land and generate substantially lower CO2 emissions. Alpro referred to various studies for substantiation and provided lifecycle analysis for the soy drink, almond drink and soy alternative to yogurt which were featured in the ad.

The dairy sector have previously argued that almond production is water intensive and used this as a way to attack the claims for almond milk. Alpro said their almonds are cultivated sustainably, with minimised water use, as well as protection for biodiversity and pollinating insects. Overall, they claimed that the environmental impact of their almond drink, as well as their soy and oat drinks, was significantly lower than that of dairy milk, with their almonds being grown in accordance with EU protections for bees and other pollinating insects, including controls on pesticides.

Rule 11.1 of the CAP Code says that the basis of environmental claims must be clear, and unqualified claims could mislead if they omit significant information. The ASA was therefore concerned the core claim of "Good for the planet" was not contextualised or qualified. It was also unclear whether the other claims, "Your recipe to a healthier planet" and "Deliciously plant based" were intended as separate claims or as qualifiers or context for the core claim, which the ASA felt led to ambiguity. Were Alpro claiming a net positive environmental benefit from the production of the advertised products? Or was their claim comparative and less ambitious, i.e. that the three products were less environmentally damaging than dairy alternatives when compared across their lifecycles?

The ASA therefore concluded that because of these ambiguities, the ad breached Rule 11.1 as the basis for Alpro's environmental claim was not clear and the ad omitted significant information which made the claim misleading.

The ASA also touched on the point of substantiation for claims across a product's entire lifecycle, noting that Alpro's environmental impact analysis for their oat drink did not include the impact of its transport, packaging and retail, although this was more of a note in passing, as the complaint was upheld for other reasons anyway. 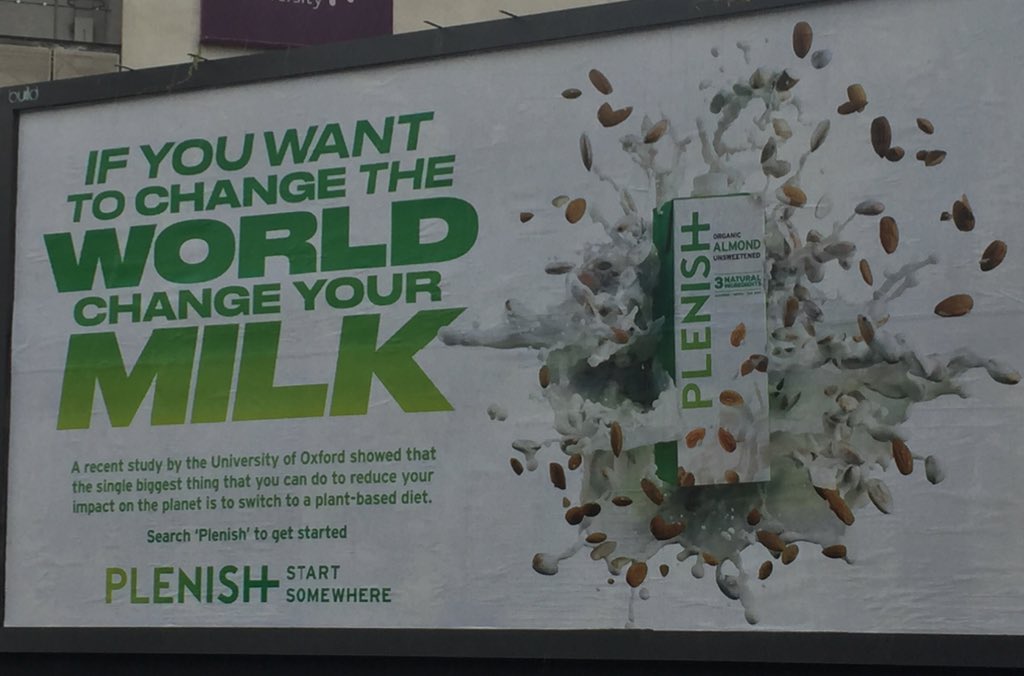 It also instructive to compare today's Alpro decision with another ASA decision from 6th February 2019, concerning 2 poster ads for Plenish almond milk. In the example illustrated above, the headline states "If you want to change the world change your milk". The body copy then continues, "A recent study by the University of Oxford showed that the single biggest thing that you can do to reduce your impact on the planet is to switch to a plant-based diet. Search 'Plenish' to get started. Plenish...Start Somewhere". You might think the two complainants were farmers, Messrs Brian Aldridge and David Archer perhaps, but we could not possibly comment. In any event, the complainants also raised the concern about the impact of almond production on water levels and therefore challenged whether the ads misleadingly exaggerated the environmental benefits of the product.

Like Alpro, Plenish mounted a strong defence. They had worked with a scientist at Oxford University who had published a large, comprehensive study of the environmental impact of food products, including meat and dairy, across their full life cycle. Plenish had used the same team of boffins to design and analyse the supply chain of their almond drink. Plenish also said they were only asking consumers to make a small change by substituting Plenish almond drink for dairy milk and that their almonds came from farms in areas of Spain not affected by drought. Presumably they mean the plain, where the rain in Spain mainly stays?

Crucially, Plenish also submitted a full lifecycle analysis for their product from the farm, through transportation and retail, together with comparative data for cow’s milk production both in the UK and abroad.

In this case, the ASA decided not to uphold the complaints. They were satisfied that consumers would understand that Plenish could form part of a more plant-based diet with a lower overall environmental impact than cow’s milk, and that the claim was based on the full lifecycle of the product. The concern about the impact of almond production on water levels was also dismissed as not applicable in this instance.

The ASA reviewed the comparative data from Oxford University's comprehensive study on the environmental impact of farming globally, which included greenhouse gas (GHG) emissions from farming, processing, transport, packaging and retail, as well as air and water pollution, land and water use. The impact per litre of each of aspects was lower for Plenish almond drink than the global data on cow’s milk. For the UK, the impact for Plenish was lower than for dairy milk for GHG emissions, air and water pollution, and water use; although Plenish's impact on land use was higher because of non-intensive farming.

The ASA therefore decided that the ads were not misleading because Penish had substantiated their claim that their almond drink had a lower impact on the environment than cow’s milk based on account the full lifecycle of the product.

So what conclusions can be drawn from a comparison of the ASA's decision about Alpro today, 20th October 2021, and about Plenish from 6th February 2019?

First, vague and general claims about being "good for the planet" should be avoided. Not only are they likely to breach the CAP Code, but they also contradict the CMA's recent guidance, which states that environmental claims must be clear and unambiguous.

Second, environmental claims should be based on an analysis of the full life cycle of a product, including production, transportation and retail. This is required by the CMA Green Claims Code, but was already a well-established part of the CAP Code, with Rule 11.4 stating that advertisers "must base environmental claims on the full life cycle of the advertised product, unless the marketing communication states otherwise, and must make clear the limits of the life cycle. If a general claim cannot be justified, a more limited claim about specific aspects of a product might be justifiable. [Advertisers] must ensure claims that are based on only part of the advertised product's life cycle do not mislead consumers about the product's total environmental impact."

As these two decisions are both recent and both relate to the same product which itself is the subject of some contentious debate, it is instructive to compare the ASA's decisions, and re-assuring to conclude that the ASA seems to have reached sound, consistent judgements in both.

The CAP Code required that the basis of environmental claims must be clear and that unqualified claims could mislead if they omit significant information.

Join me for a fireside chat with Guy Parker, Chief Executive of the Advertising Standards Authority
Brinsley Dresden