Last week, members of the Global Advertising Lawyers Alliance presented a webinar, "COVID-19 & Consumer Protection -- Global Advertising in a Time of Crisis," which summarized some important coronavirus-related enforcement trends around the world.

Here's a recap of the key issues we discussed, prepared by each of the panelists:

in Italy, during the Covid-19 emergency, there has been much enforcement of the existing consumer protection rules by the advertising authorities.  From the beginning of the emergency until now, the Italian Competition authority (“AGCM”) has been enforcing the Consumer Code’s provisions on unfair commercial practices and has started roughly 10 proceedings (then issuing in their context 8 interim measures to avoid the continuation of harmful effects on the consumers). The Italian Advertising Self-Regulatory Body (“IAP”) has been enforcing its Code of Marketing Communication Self-Regulation and has issued 2 injunctions.

The main Covid-19-related practices addressed so far by the AGCM and IAP can be grouped in 3 main categories:

Article 32 of the federal consumer protection law, which is one of its most important articles, provides that advertising and publicity should be true, verifiable, and clear. How does PROFECO act in false advertising cases?

As far as we know, there have been very few advertising complaints related to COVID-19 -- though we are watching to see how things develop.

The regulation of advertising in South Africa has always been done on two levels; first through self-regulatory bodies such as the Advertising Regulatory Board (ARB) and other industry specific organisations and; secondly, through national legislation governing the promotion and labelling of various products, from foodstuffs to medicines, liquor products and tobacco. The purpose of both self-regulation and national legislation is largely to protect consumers and to maintain honest, legal, decent and truthful advertising standards.

With the national state of disaster being declared in mid- March in South Africa, the Disaster Management Act (DMA) of 2002 was resurrected and a number of Regulations were passed to control not only the movement of people during the national lockdown that was declared from 27 March 2020 but also to restrict the sale of certain goods. More specifically, the regulations under that Act prohibited the sale of alcohol, tobacco products and all restaurant, fast food and ready prepared fresh food delivery services.

The Regulations under the DMA were also serious about combatting the spread of any fake news about the corona virus and Covid-19 and there has already been one well reported instance of a criminal prosecution against a person who spread fake news about the contamination of Covid-19 tests on social media. A website has been set up to handle all fake news claims about the virus. The attempts by a local discount pharmacy chain to elevate the price of certain PPE and related products has also been challenged.

With the announcement of the new Code of Commercial Advertising of Alcohol by AWARE.ORG at the end of January this year, it came as no surprise that the State would clamp down on alcohol sales at this time. The fact that alcohol cannot be sold to the public during the lockdown has not stopped alcoholic beverage manufacturers from promoting their brands through other side efforts. We have seen breweries turning alcohol into hand sanitiser, beer crates into face shields for health workers and cider makers turning to social media to continue the promotion of their comedy shows, encouraging members of the public to become their own best version of a stand up comic.

In general, there has also been a shift in the focus of competitors’ advertising where the urge to tease (without necessarily being anti-competitive or disparaging) has turned into more “friendly fire” and some truly South African brands have been encouraging locals to maintain good personal hygiene and to adhere to social distancing rules. This has all come through in their advertising campaigns. It remains to be seen how long the “ceasefire” will continue.

For now, brand owners are encouraged to comply with the general principles of advertising in South Africa and to “play nicely in the sandpit."

The response of the UK’s regulators of advertising and marketing has so far relied on the self-regulatory organisation, the Advertising Standards Authority (ASA), acting on advice from the relevant medicine regulator and public health authority.

In response to the government’s call for ‘Regulatory Forbearance’, the ASA has temporarily modified it prioritisation principles to focus on ads that grossly undermine public health advice or that seriously misjudge public and minority group sensitivities. At the same time, the ASA will tread lightly in relation to more innocent, technical breaches of the CAP Code, such as advertising for products that become unavailable because of the Covid-19 pandemic. The ASA has also created a simplified system for consumer complaints about misleading or irresponsible ads that relate to Covid-19 which allow them to take action more quickly, without the usual protracted dialogue with the advertiser and complainant. Four areas have been singled out for particular scrutiny: Food and food supplements; alternative and complementary therapies; medicines and medical devices; and the use of fear and distress in advertising, as well as social responsibility. Early ASA Rulings banning ads have focused on ads for face masks which either relied on fear and distress, or made claims for the use of prevention of Covid-19 which were inconsistent with advice from Public Health England. More recently, the ASA banned a series of ads for IV drips, mainly containing vitamins in a saline solution, which claimed to prevent Covid-19, and therefore made unauthorised medicinal claims. These were banned following consultation by the ASA with the Medicines and Healthcare products Regulatory Agency (MHRA), and the two organisations have now issued a so-called Enforcement Notice, telling the market about the relevant rules, and calling on advertisers to get their house in order, or face the consequences of an investigation by the ASA.

The other interesting development had been the announcement by the Betting and Gaming Council that its members will implement a temporary, voluntary ban on television and radio advertising for gambling services. This is response to significant concerns about the growth of problem gambling during the lock down, however as the ban does not extend to online advertising, it remains to be seem whether it will allay those concerns.

In the United States, we have seen aggressive enforcement of coronavirus-related advertising at the federal, state, and local level.  Consumer protection authorities are enforcing both general consumer protection laws as well as rules that govern times of emergency.  We have also seen regulators push for responsible self-regulation as well.  FTC Chairman Joe Simons released a statement saying that the the agency would be "flexible and reasonable" with enforcement, though it is unclear what leeway this gives advertisers (and it's clearly not intended to give a free pass to fraudulent marketers).

We have seen a significant amount of enforcement of state and local price gouging laws.  Some of the laws restrict price increases for all goods that consumers may need in an emergency, while others only relate to specific types of products.  The laws vary widely about the types of increases that are prohibited; some restrict any increase, while others prohibit increases over a certain amount (typically in the ten to twenty percent range).  Recently, the Texas Attorney general sued the nation's largest egg producer for price gouging.

There has been some enforcement and other litigation related to businesses not giving consumers refunds for products and services not provided as a result of the coronavirus crisis.  For example, the Department of Transportation told airlines to give actual refunds, not just vouchers that can be used to buy future flights.  The Attorneys General of New York, Pennsylvania, and the District of Columbia also told a health club chain to give consumers refunds for the period while the gyms are closed.

Regulators across the country have been aggressively prosecuting marketers -- at an almost unheard of pace -- for selling products that falsely claim to be able to prevent or treat the coronavirus.  For example, the Federal Trade Commission and the Food and Drug Administration sent a warning letter to televangelist Jim Bakker, telling him to stop promoting "Silver Sol Liquid" as a coronavirus treatment.

Government enforcement has also focused on advertisers whose aggressive marketing may have crossed the line.  Regulators have repeatedly warned marketers that they must have competent and reliable scientific evidence before making any claims related to the prevention or treatment of the coronavirus.  For example, the New York Attorney General told companies selling high-priced air purifiers to stop promoting them to consumers as a product that can prevent the coronavirus.  And, the Florida Attorney General is investigating Norwegian Cruise Lines over its coronavirus-related marketing practices.  The Florida Attorney General also sued an advertising agency, alleging that the agency deceived consumers with a coronavirus relief promotion.

Finally, we have seen social media and other platforms updating their advertising policies to prohibit or restrict coronavirus-related marketing.  And, we have seen regulators repeatedly tell platforms to do more to prevent fraudulent claims and price gouging.  The New York Attorney General, for example, worked with domain name registrars to take down websites selling fraudulent products.  And, a coalition of attorneys general told major retailers to do more to prevent price gouging. 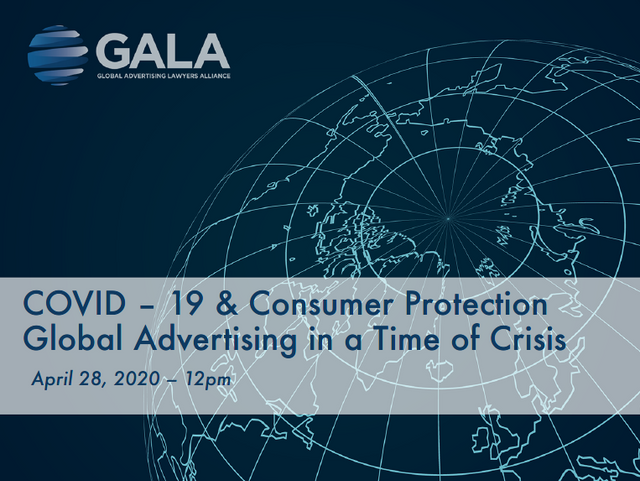