Last week the Digital, Culture, Media and Sport (DCMS) select committee finally published its long-awaited report into influencer culture.  According to Vuelio’s UK Influencer Survey 2020, the percentage of influencers with channels that provide income has risen from 34% in 2016 to 49% in 2020. This rapid growth has exposed a number of regulatory gaps and the Committee has called on the UK government to strengthen both advertising regulations and employment law.

The Competition and Markets Authority (CMA) told the inquiry that influencer compliance rates with UK advertising regulations are still unacceptably low. In 2020, a monitoring exercise by the Advertising Standards Authority (ASA) found that just 35% of 24,000 marketing posts on the Instagram accounts of 122 UK-based influencers were clearly labelled as advertisements.  We have written previously about the fact that the ASA is losing patience with influencers flouting advertising regulations.

The Committee also supports the CMA’s desire for greater powers to enforce consumer protection law. This includes the ability to make decisions directly without the need to go to court and stronger powers to enforce compliance, as well as better ways of enforcing undertakings.  The government intends to do this as part of its new legislative programme. This is significant because the ASA has been fighting a losing battle against rogue influencers who refuse to give proper disclosures. But as the ASA's main sanction is reputational damage, it is not well placed to deal with influencers who don't care about their reputation, and only want to exploit their 15 minutes of fame.

The Committee recommends that the CAP Code removes the requirement for editorial ‘control’ to determine whether content constitutes an advertisement to close a loophole for some influencer content. At the moment, the ASA looks for both 'payment' and 'control' before saying that an influencer's post is an advertisement. The CMA applies a different test, asking whether an influencer is falsely posing as a consumer. However, Committee's recommendation will create problems for CAP and the ASA. When social media emerged as the love child of advertising and public relations (or 'bastard child', depending on your point of view), the public relations industry was anxious to preserve principle that PR is not advertising and therefore not subject to the CAP Code, hence the 2 stage test. If the CAP Code were amended as the Committee suggests, the unintended consequence might be to bring PR inside the scope of the CAP Code for the first time.

The Committee also recommends that the ASA be given statutory powers to enforce the CAP Code. These powers should be considered as part of the government’s upcoming Online Advertising Programme. Appropriate funding arrangements should also be considered to ensure that the ASA is able to act effectively on these enforcement powers. Now as much as we love our readers from the ASA, we feel obliged to point out that the ASA is a self-regulatory body, not a statutory regulator, so this would be a big step. And not necessarily an appropriate one.

Influencer content on social media is becoming an increasingly popular media genre for children, particularly on YouTube. According to Ofcom, in 2021 up to half of children said they watched vloggers or YouTube influencers.  This can offer benefits, but it can also leave young people at risk of disinformation and harmful messages.  In addition, children are more vulnerable to native or embedded advertising as they find it particularly difficult to distinguish and identify.

Therefore, the report states that the ASA should update the CAP Code to include mandatory enhanced disclosure standards for advertisements targeted to children or an audience composed predominantly of children. Any updates should be supported by robust research into children’s particular information processing requirements and ensure that children are able to critically evaluate, as well as identify, advertisements.

The child influencer market is booming, with children featuring in online content across social media platforms, earning income through sponsorship and partnerships with brands.

According to the Committee, the government must urgently address the gap in UK child labour and performance regulation that is leaving child influences without protection. New legislation should include provisions on working hours and conditions, mandate the protection of the child’s earnings, ensure a right to erasure, and bring the child’s labour arrangements under the oversight of local authorities.

The Committee also says that the online advertising environment has changed significantly since 2012 when CAP conducted their review of the use of under-16s as brand ambassadors and in peer-to-peer marketing. It recommends that CAP conducts another review of the use of under-16s in marketing, ensuring that special focus is given to the use and impact of child influencers by the end of 2022.

Social media influencing is becoming a popular career choice. Of the 511 British children surveyed as part of the inquiry, more than 32% said they would consider becoming an influencer. Despite the industry’s rapid rise in popularity, earning a living from influencing remains challenging. Influencers face a range of challenges including hacking, impersonation, algorithmic unpredictability, mental health issues, online abuse and harassment.

The report states that the government should use the Online Safety Bill to ensure that reporting and complaints mechanism are tailored to meet the specific nature of harms faced by influencers. There should also be a comprehensive study into the UK’s influencer ecosystem, so the government can more effectively regulate the industry as it grows.

The Committee says that the government should commission a code of conduct for influencer marketing, as an example of best practice for deals between influencers and brands or talent agencies.  The Committee considered the ISBA Code, and praised its strengths.  However, it found that it needs to go further, as there is no consideration of minimum pay rates, pay gaps or pay inequalities. It also said that a code should recognise the right to collective trade representation for influencers, such as guilds and unions, and include a commitment to work with these groups regarding relevant issues in influencer culture.

There are some interesting ideas in the Committee's report. It seems likely that the CMA is going to be given greater powers to impose financial penalties in a more streamlined way, which will be a useful tool. While having the ASA and CMA apply the same test for deciding whether an influencer's post is an advertisement would be welcome, the PR industry is bound to rail against being brought inside the scope of the CAP Code.  And talking of codes, do we really need yet another code of influencer marketing? The ISBA Code is still shiny and new, and compliance with a multiplicity of potentially conflicting codes will be nightmare. So it remains to be seen how many of the Committee's ideas are ever implemented. The report is called "Influencer culture: Lights, camera, inaction?", but we anticipate that large parts of it will end up on the cutting room floor.

“the fast pace of growth in the influencer industry has exposed a number of regulatory gaps, particularly around advertising disclosure and protections for children” 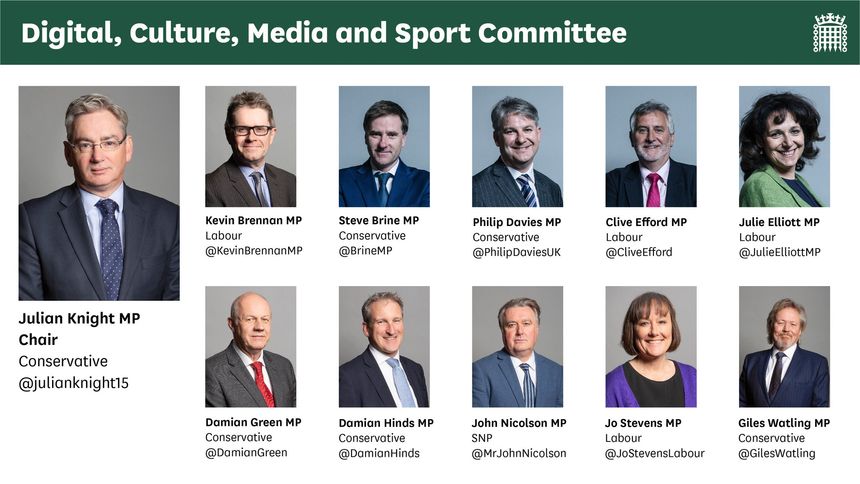 📸Today we called for action in regulating the influencer industry

I am very proud of the work that I contributed to this Department of Digital, Culture, Media & Sport Inquiry into 'Influencer Culture' as their Specialist Advisor. Here is the resulting report with the findings & recommendations for the Government https://t.co/FWX0SKUrA2

As the talent war goes 'hot', join our webinar to find out everything you need to know about enforcing restrictive covenants in the ad industry
Brinsley Dresden

What does The Queen's Platinum Jubilee tell us about British Advertising?
Brinsley Dresden