The U.S. Federal Bureau of Investigation announced more than 280 arrests in a law enforcement sweep aimed at schemes that trick individuals and businesses into wiring money to criminals.

The arrests were part of Operation reWired, which was a four-month, multi-agency law enforcement effort to disrupt and dismantle international business email compromise scams.  These scams often target employees with access to company finances and trick them into making wire transfers to bank accounts thought to belong to trusted partners.

In announcing the actions, FBI Director Christopher Wray said, “The FBI is working every day to disrupt and dismantle the criminal enterprises that target our businesses and our citizens.  Through Operation reWired, we’re sending a clear message to the criminals who orchestrate these BEC schemes: We’ll keep coming after you, no matter where you are.”

It will be interesting to see whether this is a sign of things to come.  Is this a signal that other federal agencies, such as Federal Trade Commission, will look more aggressively at global advertising issues and work more often with foreign law enforcement partners to bring coordinated actions?

"Through Operation reWired, we’re sending a clear message to the criminals who orchestrate these BEC schemes: We’ll keep coming after you, no matter where you are" -- FBI Director Christopher Wray 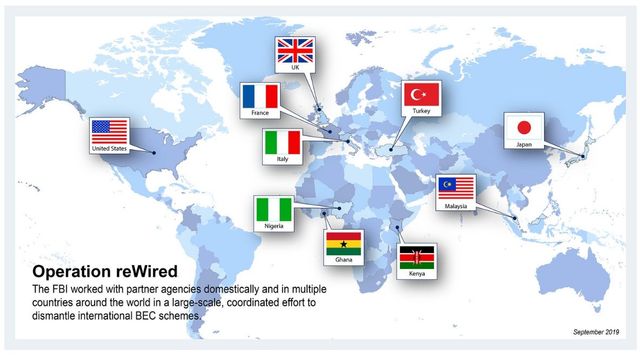 "Life's Been Good," Until You Don't Get the Rights You Need
Jeff Greenbaum

One Year of Advertising Case-Law: An Overview and a Look to the Future
Donata Cordone, Fabiana Bisceglia